Bike Lane Obstruction of the Week
An all too familiar sight: a sign placed by a public agency blocking a marked bike lane to warn cars about upcoming road construction. Often they contain a “no parking” warning, as this one does… conveniently right next to a permanent “no parking, bike lane” sign. Send your photos of bike lane and sidewalk obstructions to colin@transportationpriorities.org. 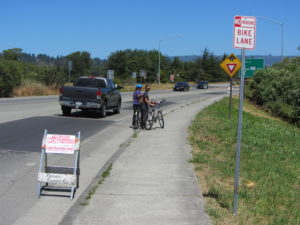 Last Chance Grade Geotechnical Report Released
Caltrans has released a third-party review of the geotechnical feasibility of various alternate routes being considered to avoid the active landslide area of US 101 called Last Chance Grade. A stakeholder group convened by Congressman Huffman previously agreed that a re-route is necessary in order to avoid a complete failure of the highway at some point in the future but did not recommend a specific route. The new report finds that the longest alternate routes – which would require clearing the most forest but would avoid old-growth redwoods – would be nearly certain to fail within 50 years, while the shortest and most expensive proposed route – a tunnel which would require clearcutting several acres of old growth – would be by far the most geotechnically stable. The findings set up some difficult decisions for Caltrans and local environmental advocates. 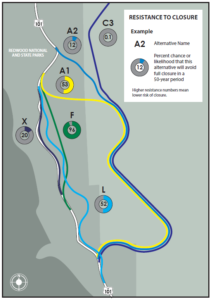 Great Redwood Trail Act Clears Another Hurdle
Senator McGuire’s bill passed the Assembly Transportation Committee unanimously and now heads to the Appropriations Committee, likely its final stop before a vote by the full Assembly (and then the governor’s desk). The one sticking point – and it’s a big one – remains securing funding to buy out the North Coast Railroad Authority’s debt and ensure the new Great Redwood Trail Agency starts out on good footing.

Man on Bicycle Killed By Truck, Blamed
A man riding a bicycle was hit by a log truck on Broadway in Eureka and later died of his injuries. Predictably, the Highway Patrol and subsequent news reports prominently highlighted that the victim was not wearing a helmet and implied that he was to blame for the accident. The unsafe design of that road for bicyclists and pedestrians was not mentioned in news reports, nor was the inherent safety risk posed by extremely heavy trucks traveling on public roads. Our condolences go to the victim’s family and friends.

Local Projects at the CTC: UPDATE
Since our report last week on a number of local projects being considered for funding by the California Transportation Commission, we’ve received more information from Caltrans staff about two of the most interesting. We’ve been told that the tide gate project along US 101, scheduled for construction in 2020, would replace nine existing tide gates built in 1954. Meanwhile, the proposed 101 improvements in North Arcata are scheduled for 2022 and would include a Class 1 Bike Trail connecting Wymore and Heindon Roads under US 101. This would allow a much more direct connection between popular bike routes through the Arcata Bottoms (connecting to the Hammond Trail) and the bike/ped crossing of the Mad River on the highway bridge.