Coastal Commission Approves 101 Corridor Project…
Despite many complaints about billboards and lack of planning for bike and pedestrian access and sea level rise, the Commission approved the changes to Highway 101 between Arcata and Eureka. What bothers us most about this project – other than the fact that much of the corridor will likely be underwater in less than 10 years – is the unstated intention to raise the speed limit. Because faster is safer, right?

..and Trinidad Hotel Project
With the focus on water, the proposed new highway interchange which the hotel relies on (but has not received any approvals yet) was barely mentioned.

Transportation Commission to Vote on Local Project Allocations
Among the projects under consideration for funding next week are “vehicle, bicycle and pedestrian improvements” on Redway Drive in Garberville and major changes to the Kenmar Road interchange in Fortuna (also to include some bike/ped amenities).

Humboldt Street Story in the News
CRTP Executive Director Colin Fiske presented about local our use of Street Story on a statewide webinar this week.

Weekly Street Story Update: 6th Street
6th Street in Eureka shows up on Street Story reports to date as a string of collisions and near misses. At least this weekend bicyclists and pedestrians got a brief respite when a stretch of 6th Street was closed down for the Eureka Street Art Festival Block Party, and CRTP provided free bike valet! You can make your Street Story report here. 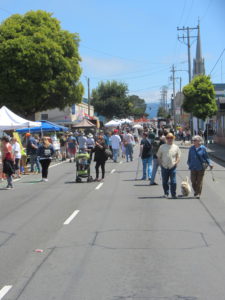 New York Times: Do Bicyclists Really Deserve All the Blame?
Anyone who’s ever mentioned bicycle hazards to a non-bicyclist knows that the most likely reaction is something like this: “Darn bicyclists, they’re so reckless, they create hazards for the rest of us.” Never mind that studies have shown bicyclists and drivers break the law at about the same rate, and a car is orders of magnitude more dangerous than a bicycle.