Editor’s Note: We’ll be taking off next week, but look for The Collector to return in December!

CRTP Submits Petition for a Safer Broadway to Caltrans
535 of you signed the petition, showing the community’s broad support for immediate safety improvements for people walking and biking on Broadway. We’re waiting for an official response from Caltrans.

New Public Relations Campaign Launched for Traffic Safety
A countywide campaign will focus on encouraging drivers to slow down, advice CRTP fully supports. You can get a free “Go Slow, Watch the Road” yard sign anywhere in Humboldt County by reaching out to Eureka Mayor Susan Seaman. As part of the campaign, the Humboldt County Board of Supervisors this week followed Eureka in adopting Vision Zero (a goal of reducing traffic fatalities to zero) by proclamation. We hope the county and cities follow up these proclamations and public relations efforts with strong actions to improve the design of streets for safe walking and biking.

Eureka Moves Forward Anti-Coal Ordinance
This is an important step toward stopping the threat of coal trains and preserving the vision of the Great Redwood Trail. It comes on the heels of a major legal settlement that will end coal exports through the city of Richmond in the Bay Area.

CRTP Submits Comments on Draft McKinleyville Town Center Ordinance
Check out what we think of the ordinance, and submit your own comments if you haven’t already!

HCAOG Board Directs Staff to Develop Project Assessment Tool
That headline might sound boring, but we promise it’s not. For the first time, Humboldt County’s regional transportation planning agency is taking a step toward applying its official safety, sustainability and equity goals to decisions about which projects get funded.

Limited New Amtrak Bus Service Approved for North Coast
The San Joaquin Joint Powers Authority Board (which despite its name oversees Amtrak connecting bus service on the North Coast) this morning approved bus-only ticketing for its route between the Bay Area and Arcata. Unfortunately, there are some exceptions – for example, people leaving from Arcata or Eureka won’t be able to buy Amtrak tickets to Santa Rosa, because Greyhound theoretically serves that need already. The agency promised to further study the issue over the coming year, however, and hopefully expand service in the future.

Arcata Committee Considers Complete Streets Policy, E-Scooters
The Transportation Safety Committee discussed a policy proposed by RCCER to require all feasible active transportation and transit improvements be made whenever a street project is undertaken. They also heard a presentation from Bird e-scooters with a proposal to deploy a dockless scooter system in town. CRTP supports e-scooters as long as there are adequate protections to ensure that they are not left in places that block sidewalks or bike lanes. No decisions were made at this particular meeting. 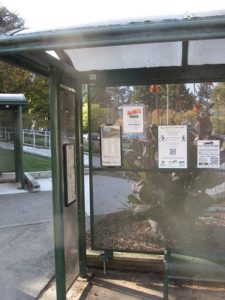 Energy Authority to Weigh In on Eureka Area Subdivision
At its meeting yesterday, the Redwood Coast Energy Authority (RCEA) Board directed staff to send comments to Humboldt County regarding the huge “North McKay Ranch” subdivision. The comments emphasize that as it is currently proposed, the project is completely inconsistent with the County’s and RCEA’s adopted plans for reducing greenhouse gas emissions – particularly from transportation.

Local Travel Has Rebounded to Pre-Pandemic Levels
So much for a reduction in driving being a “silver lining” of the pandemic.

More Re-Paving in Arcata
With all the emphasis on fixing potholes, we want to know: what about fixing all those broken sidewalks?

Secretary Pete Touts Electric Vehicles
But the US didn’t join a pledge at COP-26 to phase out internal combustion engines by 2040.