Transportation Issues Playing a Prominent Role in Local Elections
At a recent forum, Harbor District candidates clashed on East-West rail proposals, while Eureka City Council candidates sparred over plans to make bicycle and pedestrian improvements to H & I Streets. It’s just the latest example of these and other transportation issues playing an unusually large role in local politics. In fact, transportation issues are among the most talked-about in Humboldt County elections this cycle.

Bike Lane Obstruction of the Week
This week, another parked car in a bike lane – at night, when it’s even more dangerous! Send your photos of bike lane or sidewalk obstructions to colin@transportationpriorities.org. 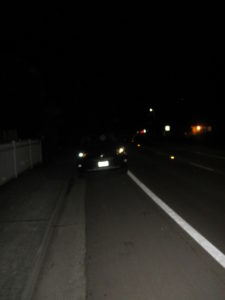 Eureka City Council to Consider General Plan Overhaul on Monday
The Council will consider approving the new General Plan at a special meeting at 5 pm on Monday. You can read some of our thoughts about the plan here and here. Then on Tuesday, the Council will consider requesting an investigation of the new East-West rail scheme and a proposal to augment law enforcement patrols on the Highway 101 safety corridor.

California Transportation Commission to Consider Bay Trail
At its meeting next week, the Commission will consider accepting the “Bay Trail South” environmental documentation and declaring the project eligible for state funding. This is the next step toward filling in the final missing segment of the long-awaited Humboldt Bay Trail. In other business, the Commission will also consider allocating funding for filling in the gap in Eureka’s Waterfront Drive, and an additional $2 million allocation for the Highway 101 safety corridor “improvement project.”

Dirty Tricks Surface in the Yes on Prop 6 Campaign
Robocalls to local (and apparently statewide) voters by Prop 6 proponents have sown confusion by implying that their absentee ballots are incorrect. Spoiler alert: the ballots are fine.

The Heavy Burden of Bicycle Tickets for Low-Income Riders
This important article highlights the plight of low-income commuters in California who ride a bike to work because they can’t afford a car, and are often forced to make a choice between riding legally but in an unsafe manner and getting a ticket they can’t afford to pay.

Large Truck Fatalities on the Rise
These collisions continued to increase in 2017 even as overall motor vehicle deaths dipped slightly.