For the past few years, there’s been an obscure, complicated, slow-moving showdown happening in the world of transportation planning. It’s a story that’s gotten little public attention, but could have huge impacts on the future of our communities. Now, that showdown is playing out in Eureka – although you almost certainly haven’t heard about it. Here’s what you need to know.

For decades, American transportation planning has been dominated by a singular obsession with the concept of vehicular level of service, or simply “LOS.” Under the LOS system, each intersection and street or road segment gets a letter grade, A through F. An “A” indicates the free flow of traffic, where each car is completely unaffected by any other cars on the road. An “F” indicates gridlock. The LOS system has been the driving force behind many if not most transportation planning decisions in the US for a long time. Transportation engineers and planners took the unencumbered movement of cars and trucks as their prime mandate, and when a street or intersection slipped below what they considered an acceptable grade, it would be targeted for increased capacity – usually adding lanes, but sometimes thing like traffic signals or roundabouts to improve the flow of traffic.

Over time, planners have come to realize that LOS A is not usually desirable from a public policy perspective, because it indicates that a lot of taxpayer dollars have been spent on infrastructure that’s not used by very many people. So most cities, counties and states have adopted a lower target – often LOS C. But although these lower targets recognize in theory that LOS A or B might not be the best idea, in practice engineers and planners never object to higher grades, only lower ones. Intersections and roads with grades below the target are often said to be “failing,” while those with higher grades are simply considered “acceptable.”

There have long been alternative ways to measure traffic. One of the most important and well-established is the number of vehicle miles traveled, or “VMT.” Unlike LOS, VMT measures the total amount of driving in a given area, rather than the speed of traffic. Because American engineers and planners have long been focused on congestion relief, and haven’t really cared about the actual amount of driving people do, VMT has been largely ignored. But that’s starting to change.

Why LOS Inevitably Results in More Driving (But VMT Doesn’t)

There’s a problem with using LOS as the basis for making decisions about the transportation system, and it’s a big one. That problem is called “induced demand.” In short, when you add more vehicular capacity to a road, more people will drive. This phenomenon has been recognized for nearly a century, but didn’t receive much attention from researchers or planners until toward the end of the twentieth century. Now, after a few decades of study, it’s widely accepted by experts that adding road capacity results in more driving – enough so that congestion relief projects of this sort are rarely successful.

This demand-inducing effect is no coincidence. In a seminal 2003 paper, Robert Cervero, a leading researcher on induced demand, showed that one of the main reasons more capacity results in more driving is that initially, increased capacity causes faster travel times. In other words, it’s not the capacity itself but the travel time that drivers are responding to. Because decreased congestion means faster travel, any method of increasing the LOS of a “failing” road or intersection back to an “acceptable” grade will inevitably induce more driving (and likely won’t relieve congestion in the long run). These problems, along with the completely car-centric nature of LOS, have resulted in long-running criticism of the system.

VMT has a major advantage over LOS as a management tool: VMT can be reduced by making alternative modes like walking, biking and transit more appealing, or by reducing the need for trips, but can’t be reduced by increasing the vehicular capacity of roads. For modern communities trying to reduce greenhouse gas emissions, improve public health by increasing physical activity and reducing toxic pollutants, and revitalize local businesses and public spaces, VMT is clearly superior to LOS.

In the battle of LOS vs. VMT, however, the first big victory for critics of LOS didn’t come until 2013, when the California state legislature passed (and the governor signed) SB 743. The new law required the state to stop using LOS as a measure of the transportation impacts of a project under the California Environmental Quality Act (CEQA). Five years later, the regulations implementing SB 743 still aren’t completely finalized. But it’s clear that the state is about to officially abandon LOS and replace it with VMT.

LOS vs. VMT: The Debate Comes to Eureka

Here’s the thing: SB 743 only applies to measuring environmental impacts under state law. It doesn’t prevent cities and counties from continuing to use LOS to make decisions about their local transportation systems. And many are continuing to do so.

The City of Eureka is currently overhauling its General Plan, a process that takes place only once every couple of decades. The new General Plan has been approved by the city’s Planning Commission and will soon be considered by the City Council. And despite a lot of improvements over the old plan, the new General Plan still relies on LOS for traffic management and largely ignores VMT. Specifically, the plan re-adopts the LOS system and establishes a target of LOS C, but contains only a tepid call to “consider the applicability” of VMT as a management tool.

CRTP has submitted comments on the new General Plan which, among other things, pointed out the problems with LOS and asked that it be replaced with VMT in the new plan. We’re continuing to ask City Council to make that change. And as a bonus, the needed edits to the plan are pretty simple. For those following along at home, here’s all that would be needed:

Although seemingly minor, technical, even arcane, these changes could make the difference between a future Eureka with speeding traffic and empty sidewalks and one with less traffic, more active transportation, a better bus system, and thriving public streets.

To its credit, Eureka’s proposed General Plan also calls for “considering” adoption of an LOS system for bikes, pedestrians and transit – not just cars. That’s actually a good idea, for one simple reason: while the city shouldn’t want more driving, it should want more people walking, biking, and riding the bus. Using LOS to manage these systems will likely have the same demand-inducing effects as when it’s used for cars, but in this case that’s a good thing! 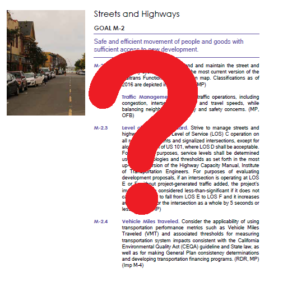