Supervisor Candidates Discuss Buses in Eel River Valley
Ferndale City Council doesn’t want buses in the Victorian village. One supervisor candidate seems to think that’s OK, while the other says there’s a real need for transit service. Some other candidate comments on transportation issues can be found in their interviews and questionnaires with the North Coast Journal, here and here.

Infill Development in Ferndale?
Speaking of Ferndale, the mayor says that the little city’s biggest opportunity is denser infill housing development. Sounds transit-friendly to us!

New Video Features CRTP Proposals for Arcata Plaza
Just in time for next week’s delivery of Plaza Improvement Task Force recommendations to City Council, Arcata News is out with a 14-minute mini-documentary about the choices the Council faces.

We Take Caltrans to Task Over Permit Amendment
Along with our allies at Humboldt Baykeeper, Northcoast Environmental Center, and EPIC, CRTP pushed back against the Caltrans permit amendment application which would have effectively added an extra lane to part of the Route 101 Arcata-Eureka corridor. The application is being discussed by the Coastal Commission today, but the word on the street is that Caltrans has backed off the lane-adding part. That’s one small victory for good planning and common sense.

Samoa Redevelopment Plan Takes Another Step
At next week’s meeting, the Humboldt County Planning Commission will consider approval of the next phase of the long-running Samoa Town Master Plan: a 332-parcel subdivision. The low-income housing and mixture of other uses in a compact area sound good, but given its location, will this project just end up adding to the county’s already high level of vehicle miles traveled?

New Open Door Clinic One Step Closer to Approval
The Arcata Planning Commission recommended approval of the project on Tuesday. The new clinic will consolidate services and update infrastructure, but it will put services a little farther from a major transit hub for some people. CRTP has worked with Open Door to provide guidance on how best to encourage employees and patients to walk, bike or take the bus to the new clinic. 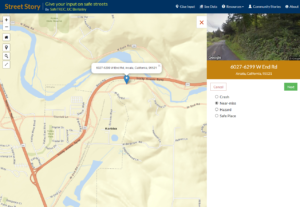 Eureka City Council to Hear Update on Broadway Plans
Maybe staff has abandoned the old capacity-increasing ideas and will now focus instead on making Broadway safer and more appealing for people on foot and on bicycles? A person can dream.

Are You the Next Arcata Planning Commissioner?
You won’t know if you don’t apply.

Leftover Measure Z Funding Goes to Roads
Of course, it won’t put a dent in the county’s road maintenance backlog. Nor will it make the streets safer for people walking and biking.

New York Will Crack Down on Worst Traffic Offenders
Research shows that repeat traffic law violators are more likely to hurt or kill someone in a crash. So now New York City will start requiring them to take a traffic safety course, or have their vehicle impounded.