Changes Coming to Bus Service in Humboldt
At its meeting this week, the Humboldt Transit Authority got an update on new transit service coming to Old Arcata Road. The service is set to begin as a pilot program on November 5, and will be a reservation-based system like Dial-a-Ride. The HTA Board also received a report on the feasibility of the Eureka Transit Service switching from a loop-based to a line-based system. A line-based system would be able to offer more frequent service (which studies show is needed to increase ridership), but would have a slightly smaller coverage area.

Bike Lane Obstruction of the Week
This week’s obstruction is a truck and trailer completely blocking a bike lane in Eureka. The photo was submitted by Collector reader Gail Popham. Thanks, Gail! Send your pictures of bike lane or sidewalk obstructions to colin@transportationpriorities.org – you might get your picture in The Collector. 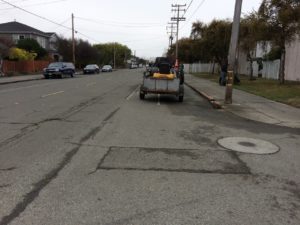 Eureka to Hold Hearing on 4th Street Widening
On Monday, the City of Eureka will hold a hearing on Caltrans’ request for a Coastal Development Permit to allow changes to parts of 4th Street. The primary change is to add an extra lane in the northern part of the city. That would make an already dangerous street much more dangerous, especially for pedestrians. Incredibly, though, Caltrans is billing this project as a pedestrian safety improvement – because at the same time they plan to upgrade some crosswalks and add a few bulb-outs. We’re not fooled.

Plaza Task Force Holds First Meeting
You may recall that the Arcata City Council voted to set up a Plaza Improvement Task Force back in April to consider and recommend specific changes to the Plaza. This week, the Task Force finally had its first meeting. It’s comprised of representatives of several official City committees, as well as members from the Arcata Chamber of Commerce, Arcata Main Street, and three at-large members. CRTP Arcata Mode Shift coordinator Ryan Campbell is a member of the Task Force, representing the City’s Transportation Safety Committee (which he also chairs). We’ll keep you updated as the Task Force begins to dig into its work.

Board of Supes Opposes Prop 6
Add Humboldt County to the long list of local governments, non-profits and businesses opposing the ballot measure.

Electric Cars Aren’t Enough
We also need to drive less. This important look at how California can meet its greenhouse gas reduction goals focuses on transportation, using the Sacramento-Davis area as a case study.