HCAOG Board Reviews Blue Lake Transit Study
At its Thursday meeting, Board members of the Humboldt County Association of Governments reviewed the recently-completed Blue Lake Transit study. The study found that extending Blue Lake Rancheria Transit Service to Fieldbrook and Western Glendale Drive would be feasible under certain scenarios, but bus service to Korbel is unlikely to be successful.

Eureka City Council to Consider Height Increases
The city is proposing to increase building height limits from 35 ft to 55 ft in the Commercial Service zoning district within the Coastal Zone. This mostly applies to parts of downtown and most of Broadway. It’s part of the city’s recent effort, initiated by the recent General Plan update, to encourage denser development downtown.

Fatal Collision at Indianola Cutoff
It’s unarguably a dangerous intersection. Whether the long-planned Caltrans interchange is the right solution is a subject of much debate.

Dangerous by Design 2020
A special edition of the national report on pedestrian safety shows that California is failing to meet even its own unambitious “safety” targets.

Weekly Street Story Update: Eel River Drive
In the words of the Street Story reporter: “Pavement is cracked and in very poor general condition, especially toward the right edge of the roadway. Shoulder is narrow or missing; where it exists it is not possible to ride due to degraded surface. Traffic volumes are high and cars travel too fast, a combination that makes cycling unsafe and unpleasant. Eel River Dr. is an essential cycling route connector in this area.” You can make your own Street Story report here. 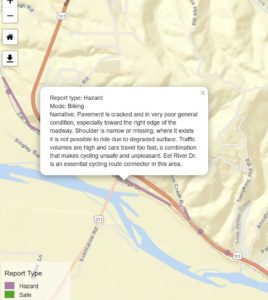 Walking is a “Superpower”
It makes your brain and your body healthier. What else can you ask for?

Will E-Bike Popularity Reduce Car Trips?
We’ll likely have some data to help answer that question soon, as they are increasingly widely adopted in places like the San Francisco Bay Area.

Is Fare-Free Public Transit a New Trend?
It’s a time-tested way to increase ridership, and more and more cities are trying it out.