Editor’s Note: We’ll be taking a week off from The Collector next week – but don’t worry, you can catch up on all the local transportation news the week after. Happy holidays!

Housing, Jobs and Transportation: Our Local Governments Still Don’t Get It
This week, the Humboldt County Association of Governments Board considered a formula for allocating state-mandated housing requirements among the local cities and the county. Without getting too deep into the wonky weeds, the main question was whether it’s more important to put new housing near existing housing, or near existing jobs. CRTP, along with Caltrans and the McKinleyville Community Services District, encouraged a focus on the jobs – because putting housing near jobs is one of the best ways to reduce vehicle miles traveled. Unfortunately, the local government representatives on the HCAOG Board ignored this advice (they voted to give jobs and population equal weight in the formula) – proving that when it comes to the all-important connections among land use, transportation and economic development, they still just don’t get it.

More Unhelpful Bike Laws Going into Effect
Don’t get us wrong, we’re not against kids wearing helmets or bike riders acting responsibly after a collision. But as we’ve reported before, high rates of helmet usage in the US have not led to safer conditions for bicyclists. And acting like bicycles  pose the same risks as cars and trucks is just living in an alternate reality.

Bike Lane Obstruction of the Week
A delivery truck blocks the bike lane on Alliance Road in Arcata. Send your pictures of bike lane or sidewalk obstructions to colin@transportationpriorities.org. 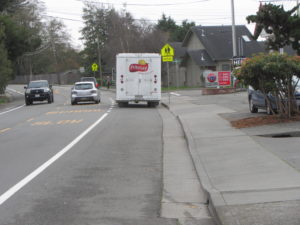 California Buses Will Be Emission-Free
The state’s Air Resources Board voted to require all public bus fleets in the state to be zero-emission within two decades.

California Transportation Advocates Announce New Comprehensive Platform
The platform focuses on how to achieve a truly sustainable and equitable transportation system in the state. One of the main groups behind the new platform, CalBike, also announced its 2019 legislative agenda in conjunction with the release.

Northeastern States Team Up for Transportation-Related Greenhouse Gas Reduction
Transportation is the nation’s leading source of greenhouse gases, but this is one of the first major regional efforts to tackle the issue directly.