Proposition 6 Fails
Tuesday’s election results included a resounding defeat for Prop 6, which would have repealed the recent state gas tax increase funding infrastructure improvement, and would have made it much harder to fund non-vehicular improvements in the future. In other transportation-related results, Humboldt County voters approved Measure O to make permanent the sales tax increase which has funded a number of road repair projects in the last few years, while Eureka’s Measure I gained a solid majority for the proposed road-repair tax but fell short of the two-thirds needed. Meanwhile, all of the Eureka City Council candidates who backed a plan for a road diet on H & I Streets retained their seats in the face of concerted attacks from opponents focused on this issue.

Bike Lane Obstruction of the Week
Surprise, surprise – it’s another parked vehicle blocking the lane. Send your pictures of bike lane or sidewalk obstructions to colin@transportationpriorities.org, and you might just be featured in The Collector! 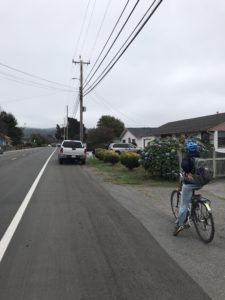 Eureka City Council Sets Special Meeting for $450,000 Stop Light
The traffic signal is seen by many as a subsidy for a big out-of-town fast food corporation. (We know we don’t need to remind our readers that fast food, the industry that brought us the drive-thru window, is the pinnacle of car-centric culture and commerce.) Attend the meeting Wednesday to have your voice heard.

New Report Agrees: Eucalyptus Must Go
A second arborist’s report commissioned by Humboldt County agrees with the first report, finding that many of the eucalyptus trees along the route of the proposed final section of the Humboldt Bay Trail must be removed for the safety of trail users.

More Evidence that Uber & Lyft Are Taking Rides Away from Transit
In Seattle, they carry more riders than light rail – and mostly in parts of the city well-served by transit.