Bike Lane Obstruction of the Week
Here’s a classic: construction in the bike lane, with a warning sign (presumably aimed at cars, and completely blocking the bike lane) calling it “shoulder work.” Attention public works professionals: bike lanes are lanes of traffic, not shoulders! Submit your photos of bike lane or sidewalk obstructions to colin@transportationpriorities.org 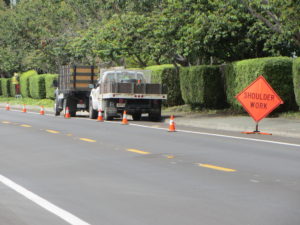 LoCO Op-Ed: H & I Streets Project A Great Idea
H Street homeowner (and HSU professor) Erin Kelly writes a convincing piece in support of the traffic-calming, bike-accommodating project. This follows a not-so-convincing screed against the project (and against bicycling in general) in the Times-Standard earlier this week.

Candidate for Local Office to Host Ward Bike Tour
Biking as part of a local political campaign? Could it be that some people actually consider the bicycle to be a legitimate, responsible, even mainstream form of transportation?

Great Redwood Trail Act Clears Another Hurdle
Senator McGuire’s SB 1029 passed the Assembly Appropriations Committee on Thursday with another unanimous vote. The bill was amended by the Committee, but it’s not clear yet what exactly those amendments were. Meanwhile, the biggest hurdle remains: securing the promise of funding from the governor. CRTP and other local groups continue to urge supporters to call Governor Brown’s office and tell him you want the bill fully funded.

Bike/Ped Safety in Valley West
A coalition of groups is holding a community training on August 29th.

HCAOG Considers Opposition to Prop 6
Also on this week’s agenda was a contract with a consultant to develop a local “mobility-on-demand strategic development plan.”

The Plight of the Truck Driver
Another striking piece highlights the underbelly of America’s freight transportation system.