Rail Authority Ordered to Cover Court Costs for Enviros
In yet another blow to the beleaguered agency, the North Coast Railroad Authority has been ordered to pay the court costs for local environmental groups with whom it’s been involved in years-long legal battles. One more reason for the NCRA to finally abandon its elusive dream of restoring rail service through the Eel River Canyon, as the newly passed SB1029 requires it to turn its attention toward long-term rails-to-trails planning.

Eureka Transportation Safety Commission Meeting Cancelled…Again
This is becoming a habit. Why does the City of Eureka struggle so much to maintain a functioning commission meant to consider its many pressing transportation issues?

Applications Due for Measure Z Oversight Committee
The deadline is next week for citizens interested in serving on the committee. Funds from this half-cent Humboldt County sales tax have often been allocated to road repair and maintenance projects in recent years.

HCAOG Board Looks to Committee Changes for Unmet Transit Needs
The Social Service Transportation Advisory Council (SSTAC) advises the Humboldt County Association of Governments on the annual task of assessing local unmet transit needs. Staff are recommending a few changes to the SSTAC, including adding a seat for CRTP. (We’ll be proud to participate in this important process!) Also on next week’s HCAOG Board agenda: An update from Caltrans on the long-running Last Chance Grade project.

Sidewalk Obstruction of the Week
Yup, there’s a sidewalk somewhere between those brambles and that sign post. Just not a very usable one. Send your pictures of bike lane or sidewalk obstructions to colin@transportationpriorities.org. 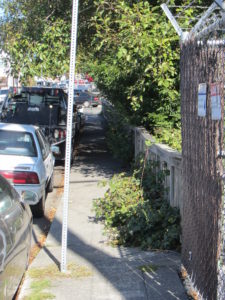 At Long Last, New CEQA Transportation Rules Are Final!
Five years after the law mandating the changes, the state has finally adopted new CEQA guidelines which prohibit consideration of traffic delays as an environmental impact. We’d like to say that’s the last we’ll see of the outmoded “Level of Service” concept in this state. But sadly, reactions to the new rules indicate that many planners and engineers will resist changing as long as they can.

On Congestion Pricing & Inequity in the Transportation System
A cogent and thought-provoking commentary.