Bike Lane Obstruction of the Week
Another case of trash and recycling bins in the bike lane. This one’s particularly egregious (check out the far side of the street). Send your photos of bike lane and sidewalk obstructions to colin@transportationpriorities.org. 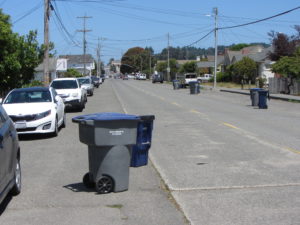 Future of the Bay Trail to Be Decided on Tuesday
The Humboldt County Board of Supervisors is slated to vote on the final four miles of the Bay Trail on Tuesday morning. The main debate is expected to center around the proposed removal of some of the eucalyptus trees overhanging the trail route. County staff have doubled down on their assertion that there can be no trail without eucalyptus removal, while a core of folks who just love those (non-native) trees insist the eucalyptus must be saved.

Driver Sentenced in Eureka Pedestrian Fatality
We would be remiss not to occasionally cover the depressingly regular car-on-pedestrian and car-on-bicyclist collision cases on the 101 corridor in Eureka.

Caltrans Looks to the Future While Planning for the Past
The agency’s latest quarterly newsletter (err, “performance report”) features an assessment of the challenges of planning for an uncertain transportation future, followed immediately by an article about funding massive highway expansion projects in order to (allegedly) relieve congestion. One assumes that the irony of guessing at the priorities of the 2050s while funding the priorities of the 1950s is rather unintentional.

More Evidence that Transportation is Driving Climate Change
This article buries the lede a bit, but finally there it is again: cars and trucks are foiling all our other efforts to reduce greenhouse gas emissions.

The Promised Self-Driving Future Squares Off Against the Proven Record of Public Transit
Planners face big choices amid plenty of confusion and overblown rhetoric.

A Nation Divided… by Cars
The politics of transportation have never been so divisive.