Special Meeting About Arcata Plaza Next Week
The City Council will hold a “study session” with the Plaza Improvement Task Force on Monday. This is one of the last and best chances for the public to ask for a more pedestrian-friendly Plaza before official recommendations come to the Council in the next month or two.

Big Names in Del Norte for Transportation Commission Meeting
The California Transportation Commission will be holding a meeting in Crescent City next Wednesday. Participants will include Congressman Jared Huffman, State Senator Mike McGuire, and Assemblymember Jim Wood. There’s a morning tour of Last Chance Grade and parts of Highway 199, a 2pm town hall, and a “community meeting” about Last Chance Grade at 6pm.

Eureka City Council to Consider Rolling Back Parking Restrictions
Some local businesses have complained about the two-hour restrictions in parts of downtown. The Council may remove them. Making free public car storage even easier should definitely be at the top of our local government agenda, right?

Weekly Street Story Update: Crashes & Near Misses
Research suggests that a location where near misses are reported is more likely to be the site of a future crash. Here, we highlight a relatively minor intersection in Arcata – LK Wood Blvd and Hiddencreek Rd – where two near misses have been reported in Street Story, but no crashes have yet been reported (nor are there any in the state’s official collision data). This is an example of the importance of Street Story reports – in places like this, they could allow officials to intervene with safety improvements before a crash occurs. You can make your Street Story report here. 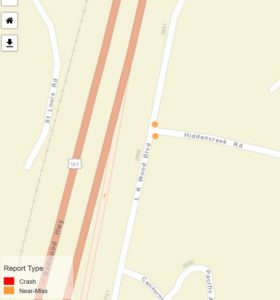 Bicyclist and Pedestrian Deaths Increase Again
Overall traffic fatalities are down nationally, but the most vulnerable road users are hit and killed at alarming rates. Many officials continue to blame the victims.

Civility, Inclusiveness and Other Good Reasons to Walk
Walking: it’s not just for exercise and greenhouse gas reduction! Plus, walkable neighborhoods increase economic mobility for kids!

Auto Industry Divided Over Fuel Economy Rules
The Trump administration is trying to rescind California’s long-established authority to enforce stricter fuel economy standards than the federal government. While some big automakers are supporting California in the fight, another group just declared support for Trump.