Bike Lane Obstruction of the Week
This week, a two-for-one obstruction: Low-hanging branches ready to knock an unsuspecting rider off a bike, right next to a row of cars blocking the lane! Send your photos of bike lane or sidewalk obstructions to colin@transportationpriorities.org. 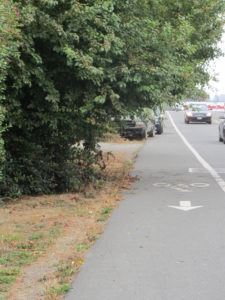 Sign the Petition for a More Pedestrian-Friendly Plaza!
If you haven’t already signed it, that is.

…and E-Bikes, Too!
The Arcata TSC talked e-bikes and speed limits at their meeting this week, too. CRTP’s Colin Fiske was also on KHUM to talk about it on Wednesday.

New Group to Sponsor Public Meeting on Trinidad Development
The newly formed Humboldt Alliance for Responsible Planning will hold a public informational meeting on Thursday, September 27, from 6-9 pm at the Trinidad Town Hall to discuss the Trinidad Rancheria’s plans to build a 100-room hotel… and a new interchange on Highway 101 less than a mile from the existing Trinidad exit. The just-released Environmental Assessment for the hotel project can be found at the link above.

The Skunk Train and the Revitalization of Fort Bragg
Could extending and fixing the tourist train finally spur redevelopment of the town’s coastline?

Should Helmets Be Mandatory for Drivers?
After all, as the author of this article points out, many more people get head injuries in cars than on bikes.

A Spanish City Completely Removes Cars from the City Center
And people love it!