Skip to content Skip to main menu
Home › The Collector › McKinleyville Asks: Which Comes First – the Zoning or the Community Plan?

County Zoning Decisions in the Spotlight
Confusion reigned at a special meeting of the McKinleyville Municipal Advisory Committee this week for the County to gather input on proposed zoning text amendments to implement the new General Plan. Residents complained that they didn’t know how we’d gotten to this point, or how to make sense of the County’s idea to do community planning for the proposed town center this summer – after the zoning rules have already been finalized. Following a suggestion from CRTP’s own Colin Fiske, the Committee eventually voted to ask the County to change the zoning rules to allow future community planning to specify further standards which could supersede existing regulations. CRTP believes that good town center plans in McKinleyville and other local communities hold the key to a more walkable, bikeable, and transit-friendly county. The County Planning Commission is scheduled to take up the zoning text changes next Thursday. 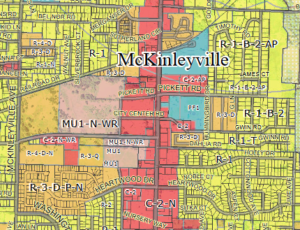 Reader Points Out Broader Impacts of Richardson Grove Project
A North Coast Journal reader highlights the fact that this project, if constructed, won’t impact only the Grove – it will mean more large trucks throughout the region. CRTP’s own study of this issue is available here.

CRTP To Host McKinleyville-Arcata Practice Bike Commute
Come out and join us!

How Bike-Friendly is Arcata?
Inquiring minds from the League of American Bicyclists want to know.

Bill Would Phase Out Diesel Trucks
The proposal is in line with what science and official state policy say is necessary to cut greenhouse gas reductions within the time required. But trucking companies apparently think it’ll be harder to replace diesel than to deal with catastrophic climate change.

“There’s No Dodging Ubers Today”
Oh, the fun we can have with temporary street closures.

Quick Action to Improve Bike/Ped Safety Is Possible
This example from San Francisco shows that when officials are motivated, a major street makeover is possible in a short amount of time.

Tesla Joins the SUV Bandwagon
Better for the environment than a gas SUV? Definitely. Better for pedestrians? Not so much.