Note: The Collector will be taking a summer break next week. But don’t worry, we’ll be back on August 2nd!

Richardson Grove Event This Weekend
EPIC is hosting a “potluck rendezvous” at Richardson Grove State Park on Sunday to celebrate the fact that there’s still no highway widening in the grove. And you can carpool there!

Fortuna Hosts Annual Celebration of Cars
We know people love their cars. But wouldn’t it be nice to celebrate forms of transportation that aren’t, you know, killing people, communities and the planet? 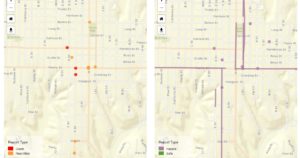 Caltrans Says It’s Addressing Bike, Pedestrian Fatalities
But its local solution to a pedestrian high-hazard area – 4th Street in Eureka – includes adding an additional car lane at the same time as it upgrades some of the pedestrian infrastructure. That doesn’t make much sense to us.

Federal “GREEN Streets” Act Introduced
A bill in the Senate would require states to measure and reduce both vehicle miles traveled and greenhouse gas emissions from transportation. That would mark a monumental shift in the way we spend our transportation dollars.