George Floyd, like so many other Black men and women, was murdered by police in the street. The public right-of-way – space dedicated by society to allow the free movement of people through and between our communities – is all too often the site of violence directed toward people of color. This is no coincidence. The creation of modern police forces in American cities, the dramatic expansion of police powers, and the focusing of those powers on people of color with oppressive “law enforcement” activities can all be traced back directly to the rise of cars in the first half of the twentieth century. And, although it receives less attention, people of color are much more likely to be killed by cars while walking in the public right-of-way, even when police officers are nowhere around.

The street is also the site of much of the public protest against Floyd’s killing. The sanctity of automobility in our society is evidenced by the fact that blocking traffic is considered one of the most radical forms of protest, and many drivers apparently feel the right to use their vehicles as weapons to push through the crowds. In some cities, officials seem to be using the transportation system to punish protesters, stranding them at night by shutting down public transportation and bike share systems.

The transportation system is entangled with the devaluation of Black lives – and many other systemic inequities – in so many more ways than these. We have sometimes highlighted these issues in The Collector and other venues. But as transportation advocates and educators, we have not done nearly enough. Transportation space is historically, deeply, inextricably racialized, and we have often failed to call out racial inequities where they exist. Sometimes this is a result of a misguided sense of keeping our work focused and “staying in our lane” – but that’s no excuse when we know that racism pervades every street, sidewalk, trail and bike lane in the country.

We Want to Know What You Think About Transportation-Related COVID Responses
Please fill out the survey and spread the word.

County Officials Ready to Help Businesses Move into Parking, Street Space
Responding to suggestions from CRTP, Supervisor Mike Wilson, and others, county staff say they’re ready and willing to let restaurants and other businesses set up tables in parking spots. As we hinted at in our press release, the response to our other suggestions – focused on increasing safety during the pandemic for the most vulnerable road users, including walkers, bicyclists, kids and folks with disabilities – has been more muted.

Arcata Eases the Way for Outdoor Dining
The City Council voted to eliminate many of the restrictions on businesses operating in the public right of way. In addition to sidewalk cafés, discussions include possible closure of 8th and 9th Streets on the Plaza for outdoor dining, following ideas long advocated by CRTP. We are following developments closely to be sure that these changes will help out both struggling local businesses and members of the public who need space to walk and bike safely around town.

Discussions Continue Over New Transportation Sales Tax Possibilities
This week, the Humboldt County Association of Government’s Technical Advisory Committee again discussed the possibility of putting a new tax measure on the ballot to fund local transportation projects. The continued discussion is apparently the result of the fact that, at the last HCAOG Board meeting, the Humboldt Taxpayers League – an organization which appears to consist only of two local perennial gadflies – said it would support a tax measure if the revenues were devoted only to fixing roads. Some Board members were so impressed by that declaration that they didn’t want to let the proposal die, despite acknowledging the bad timing in the midst of a global recession. (Others questioned why the League insisted that money couldn’t go toward transit or active transportation projects also.)

Weekly Street Story Update: Tell Your Story
More than a dozen new reports of hazards and near-misses have come in to Street Story from Humboldt County residents over the past two weeks. If you’re experiencing problems on the street as a result of the pandemic – like not being able to stay 6 feet from other people on a narrow sidewalk – please reach out and let us know. And as always, if you see or experience a hazard, near-miss or collision, make your Street Story report here. 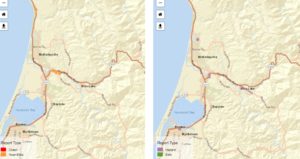 Uber & Lyft Caught Destroying Perfectly Good E-Bikes
Amid all the upheaval in the bike share industry, the two companies apparently decided to just trash  bikes they didn’t want any more, rather than selling or donating them.

Quick-Build, Quick!
CalBike works to speed up the pace of bike network build-out.

E-Bikes Are Great
The New York Times sings their praises.