Free Transit Tuesdays Coming to Humboldt!
Every Tuesday from April 7 – June 29, Redwood Transit, Eureka Transit, Southern Humboldt and Willow Creek buses will be free! If you haven’t tried local transit in a while – or ever – this is your chance to give it a try. Here at CRTP, we love it! 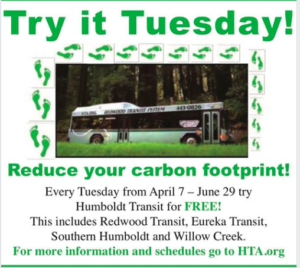 Ornelas Resigns, Leaving Plaza Changes in Question
Susan Ornelas recently cast the deciding vote on the Arcata City Council for pursuing partial pedestrianization of the Plaza. She was also just appointed to a Council sub-committee to receive input from businesses (and possibly other stakeholders) on trial closures of 8th Street on the Plaza. Until someone is appointed or elected to fill her seat, the Council now appears to be evenly split between members supporting and opposed to pedestrianization. Some decisions could be made at next week’s Council meeting – unless it’s canceled due to COVID-19.

McKinleyville Town Center Discussion Continues
This week’s meeting again featured talk of form-based codes, road diets, and walkability. Nothing has been decided, but at least good modern land use and transportation planning practices are on the table!

Weekly Street Story Update: Broadway
We know we’ve featured Broadway here before. But it’s such a hazard for bicyclists and pedestrians that it merits returning to it from time to time. And as the City of Eureka and Caltrans explore possible changes to the corridor, we’d like to remind them: lots of people have made informative reports on Street Story! You can make your own Street Story report here.

Media Coverage Affects Public Perception of Collisions
Victim blaming, ignoring history and context, absolving the driver – it’s not news to us. But it’s a good reminder to be careful about how we write and talk about street safety.

Suburban Malls Try to Become Real Town Centers
Could this become a trend?